Skip to content
HomeOscar Pistorius – fastest man with no legs! 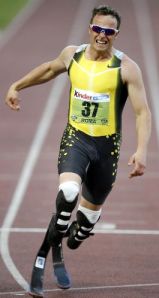 When Oscar Pistorius‘ lower legs were amputated at age 1, few would have banked on this South African challenging world-class sprinters. At 20, when he began to close in on Olympic-qualifying time for 400m, experts posited that his times were so good, he must have been getting an unfair advantage from his bladelike prosthetics. When he set his sights on the Olympic Games in Beijing, the International Association of Athletics Federation (IAAF) ruled he couldn’t compete against able-bodied athletes.

Living with prosthetic legs was seen as a huge impediment, but he has turned this prescription upside down. His disadvantage has become the advantage. It’s too easy to credit Pistrius’ success to technology. Through birth or circumstances, some are given certain gifts, but it’s what one does with those gifts, the hours devoted to training, the desire to be the best, that is at the true heart of a champion.

(Adapted from TIME magazine, written by Erik Weihenmayer – the only blind person to conquer Mount Everest)

One thought on “Oscar Pistorius – fastest man with no legs!”